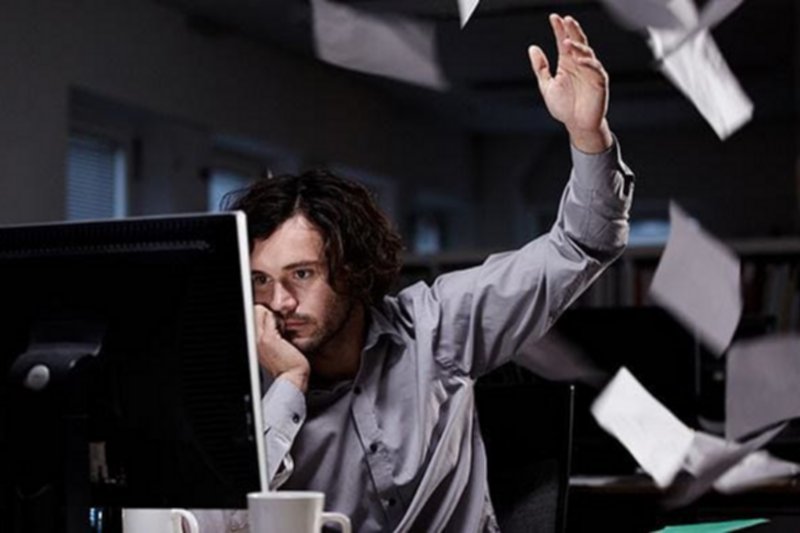 Don’t React to Your Clutter! Respond to It!

The difference between a response and a reaction has been analyzed exhaustively over the years. Although it is a bit difficult to nail down who first coined the comparison of these two terms, the foundation of this line of thinking was first taught by author, businessman and educator, Stephen R. Covey, through his “90-10 Principle” as discussed in his book Seven Habits of Highly Effective People. The principle follows: “10% of life is made up of what happens to you. 90% of life is decided by how you respond.”

It is no surprise one of the greatest challenges I have in working with clients is helping them understand the difference between responding to their clutter and reacting to their clutter, especially when they are frustrated and under duress.

A typical clutter situation does not manifest overnight. No one goes to bed with a clean office and awakes to a room you can barely walk through; papers covering every horizontal surface; and boxes, books or stacks of furniture pushed against walls or stacked in the corners.

Clutter is the by-product of avoidance in processing your stuff over time.

There are many reasons why we avoid processing our stuff:

What has been most interesting –and telling- for me is the frequency with which my clients with the most challenging clutter situations are struggling because of their unwillingness to respond to the emotional component of their clutter. Although other reasons are frequently cited and offered as convenient excuses as to the cause of a situation, it becomes evident quite quickly during work sessions when emotional response is the primary problem.70% of the time my clients REACT to their clutter.

So what’s the difference between the two terms? They are both actions? Right?!?

Although the dictionary and thesaurus often use these terms interchangeably there are powerful differences between the two actions. A reaction is the emotionally-charged activity we engage in to find the quickest, easiest and least painful solution to a perceived threat or obstacle. It is a defensive action to a specific stimulus that may serve us well in the interim but not the long-term. A response is an action that is measured and aimed at containment or control of a specific variable or problem. Typically a response evokes a less emotional more pragmatic approach, which allows us to consider long-term sustainable solutions.

I find real-life examples are an excellent way to demonstrate the difference between these two actions. Two of my clients have been teachers and each reacted to their clutter in very different ways.

Amanda* was a beautiful, conscientious, creative, and extremely talented teacher who was passionate about teaching. She was employed in a troubled school system struggling with lack of budgets and over-populated classrooms. Unfortunately due to politics and poor leadership she lost her job, which for her was a crushing blow. Initially our project worked started in the storage area of her basement and expanded into a home office. As we began sorting through piles of paper and possessions I noticed a recurring behavior when we came to a specific box. The behavior was avoidance. I have a 3-touch rule when working with my clients in that they are only allowed to delay processing of an item twice, on the third touch, a decision must be made. Her reaction in having to deal with this box said it all. Sadly, this had become her personal box of horror. It was the box that contained everything relating to her termination and she had not been able to bring herself to physically touch it for two years. It represented failure, which is how she ultimately viewed herself. But avoiding the box had not helped her. Instead of processing it and dealing with pain, rejection, and self-doubt, the box became both a physical and mental block in her life. Fortunately, she allowed me to work with her in responding to the box and negative feelings it produced. We discussed her fear and apprehension. We discussed if anything in this box legitimately represented her, or if it was in fact negative baggage she could let go of. We also addressed the fear of revisiting items she had associated with the negative event. Quite often our fear of something is far worse than its actuality. Ultimately, we were able to get through the box with a few tears, lots of hugs, and really big trash bag. It was a turning point in our project work, and it was also a turning point in her attitude about herself.

Lisa* was another rock-star teacher who went above and beyond to help her students -many who were economically challenged- through extra tutoring and by providing resources and supplies for their use in her class. The problem was that Lisa had been so busy taking care of everyone else’s needs she neglected to draw healthy boundaries for herself. With little time and lots of stuff things soon got out of control. She also struggled with a common problem of holding onto teaching resources she had not needed in years, because “she might need them someday.” She was exhausted, overwhelmed and just wanted to be done. Lisa’s avoidance problem presented itself differently. She was all about the end-result. As an organizer you might believe we would rejoice when a client exclaims, “I don’t care anymore just get rid of it all.” Not so much. Reactive behavior that gets rid of clutter without owning it is equally dangerous, because if you don’t identify what caused the problem in the first place, you can’t correct the behavior. And if you don’t correct the behavior you are likely to repeat it. A huge factor in helping to ensure a client doesn’t repeat behavior requires us to work with our clients to process their clutter so they can better understand what caused their problem and also identify what systems they can put into place that allow better management of areas that were problematic in the past. When Lisa took the time to respond to her clutter through ownership of it, she was able to see for herself what changes she needed to make in how she thought about the resources and supplies she chose to keep. This exercise also helped her to set milestones and put systems in place that would limit the quantity of items kept, as well as the amount of time she would keep them.

*Names have been changed to protect client identity

The second distinct and tremendously important difference between a response and a reaction as evident in my client examples is also -in my opinion- most integral in ensuring successful long-term resolution of a client’s organizational problem.

A reaction –more often than not- is an unconscious and even involuntary act. Instinctive impulse rather than conscious or deliberate thought precedes reaction. We react out of fear and from a defensive posture. A reaction does not empower us as much as it subjects us. When we react we surrender both our power over our situation, and our right to choose our outcome. A response is a conscious choice and it is an action of empowerment. When we are empowered to make choices in our lives we actively engage in thinking about options and alternatives available to us. We approach our problems and challenges from a position of strength. Without empowerment of choice it is extremely difficult to regain control of our lives, instead we are relegated to being victims not victors. Empowerment fosters the knowledge that we have available within ourselves the ability to face and overcome our challenges through deliberate choice, and when we choose an appropriate and effective response, we establish a new behavior. And when we establish a new behavior we take the first step toward making a life less messy.

Successful long-term resolution of any clutter situation requires response not reaction to the problem.